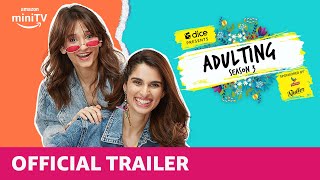 From the makers of Little Things and What The Folks (WTF!) comes “Adulting”, a coming of age story about two young women trying to handle the responsibilities of being independent adults in the fast-paced, urban bustle of Mumbai.

Take a peek into the daily life and shenanigans of two twenty-something women: Ray & Nikhat, as they try to make it through adulthood in their own unique way.

This is India’s first web-series to have a mostly-female team right from the director, writers, editor, principal cast, assistant director team, line producer, and several other key positions.

An original series by Dice Media – A Pocket Aces channel.

Where to watch Adulting?

Adulting is a Hindi web series produced by Amazon miniTV, Dice Media and is now streaming on Amazon miniTV, Youtube. This show is on Season 3 now and is Free to watch.

Watch it now on minitv