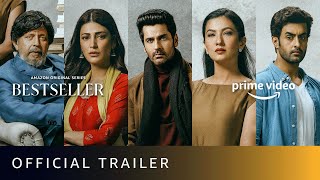 
Tahir Wazir, one of India’s most celebrated novelist has failed to write anything for a long time since his last book became a bestseller 10 years ago. . Meetu Mathur, a young, innocent girl comes into his life one day seeking his blessing. She is his huge fan, a writer herself, and she needs his guidance. Tahir finds the needed inspiration in her life’s story and starts writing his next novel based on it. About the same time, Parth Acharya joins his wife Mayanka, a celebrated ad film director as her assistant but seems to have something vicious planned for Tahir Wazir. What starts off as a simple war of words leads to chaos, drama, and death. As the events unfold, ACP Lokesh steps in to investigate and unravel the mystery.

Where to watch Bestseller?