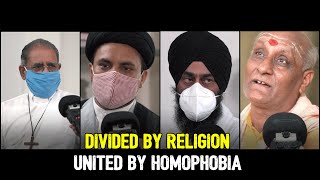 
If you want to get leaders of different religions talking in unison, ask them their ‘Gods’ views on homosexuality! No, the fact that they are homophobic isn’t a surprise, but the things they say are and the impact it has on young kids coming to terms with their own identity is horrific. In this episode of Dharam Sankat, we deal with homosexuality and the pressure, torment, harassment the LGBTQI+ community faces at the hands of religious leaders who push their ‘unnatural’ agenda, doctors who run conversion centres and their families, who force their children to get ‘fixed’.

Where to watch Dharam Sankat

Watch it now on external