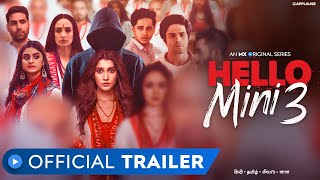 
Season 1: Rivanah is new to the city of Mumbai and being new the city is awe-inspiring and frightening to her. But even so, she carries on with her life, until one day she finds out that someone is stalking her. Going beyond stalking she is being mentally harassed at every turn of her life affecting each and every aspect of it. How will she get out? Find out on ‘Hello Mini’ streaming on MXPlayer.

Season 2: The voiceless, nameless, and faceless ‘Stranger’ has returned to haunt Mini again and this time, the dare is to stay alive.

She must follow the Stranger’s order and enlist herself to play the dangerous game of Dare Defy on the dark web – or face dire consequences. As things begin to unfold and rapidly spiral out of control for Mini, she becomes a key suspect in a murder investigation because of her participation in this illegal game. Will Mini be able to beat Stranger and his game? Or will this game be the end of her?

Season 3:  Rivanah’s life goes back to normalcy when she and Danny get back together and she starts working at Space Age Technologies. Rivanah’s memories about Hiya Chowdhary start resurfacing and it leaves her parents in a fix. Tista’s sudden death pushes her to uncover the truth about a cult group that honey traps politicians for its ulterior motives. As Virat plots and schemes against Rivanah to avenge Vixy’s loss, will Rivanah finally close in on finding out who the Stranger is?

Where to watch Hello Mini – Season 3 Out Now?