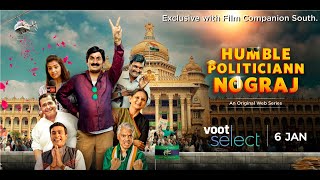 As you found this web series to be good...


Our humble story unfolds 5 years after HUMBLE POLITICIAN NOGRAJ became an MLA for OBP (ONE BIG PARTY). Present Day: Karnataka Legislative Assembly Elections Results are out and it’s a hung government. No party has the majority. Will Nograj’s Party (OBP) join hands with MSP (MOST SECULAR PARTY) with self-obsessed State President KRISHNA GUNDU BALA or form a coalition with the confused politician PUSHPESH of FRP (FAMILY RUN PARTY). Caught between the twists and turns of Resort Politics, Horse Trading, Floor Test, Power Play, Big Boss feels, the Seniors at the Centre and the Russian Mafia, Nograj has to spin a new web to get the most prestigious seat in the state – that of the Chief Minister.