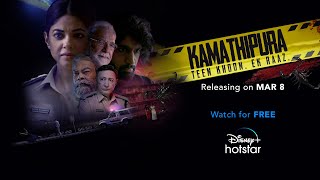 Kamathipura, a story of three murders and one mystery that takes you right into the underbelly of Mumbai’s crime network – through drugs, extortion, hawala, human trafficking, and murder. A whodunnit that will keep you guessing till the end.

Update: The web series was supposed to be released on March 8th. In light of the recent regulations placed in by the CBFC, the creators and Disney+ Hotstar have postponed the release of Kamathipura web series until further notice. Here is Meera Chopra’s update on twitter regarding it:

Where to watch Kamathipura?

Kamathipura is a Hindi web series produced by Disney+ Hotstar and is now streaming on Disney+ Hotstar. This show is on Season 1 now and is Paid to watch.