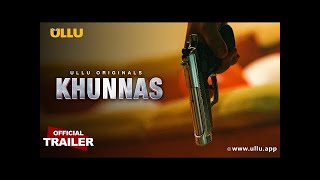 Khunnas is an Indian Hindi language web series produced by ULLU and is now streaming on Ullu OTT Platform.

It is directed by Saheem Khan and is a Adult, Erotica show. This show is on Season 1 now and is Paid to watch.

A house decked up like Diwali just for their daughter’s birthday is thrilled by gunshots. The assassin is none other than their driver whose rage triggered by the birthday girl’s act in the past. Witness the twisted affair behind this revenge drama, that leads to a massacre.

Khunnas is now streaming on Ullu. This show is on Season 1 now and is Paid to watch.

Watch it now on ullu

Where can I watch Khunnas web series?

All Episodes of Khunnas are streaming right now on Ullu.

No, Khunnas is not free and requires a paid subscription to watch

Will there be a Season 2 of Khunnas?

There is currently no information on whether the popular Erotica web series Khunnas is set to return on Ullu or with any other platform with its new season. We will update when the streaming platform announces.

On which OTT platform is Khunnas?

The new season of Khunnas was released on Ullu on Jun 29, 2021. You can watch it on the official app and website of Ullu by subscribing to the premium plan of Ullu.

Is Khunnas on Ullu free?

No, Khunnas is not free and requires a paid subscription to watch on Ullu

Is Khunnas based on a true story?

No, Khunnas is a fictional web series and not based on a true story .

Can you watch Khunnas with family?

No, Khunnas handles a lot of mature topics and has content that's deemed inappropriate for young folks. It has either excessive use of profanity, sexuality or violence. It is best suited for 18+ Adult audiences. Additionally, Khunnas has content that's meant to tittilate the viewers and shows scenes containing sex and (partial) nudity. It definitely should not be watched by young viewers.

How many seasons of Khunnas are there?

Is Khunnas available on MX Player?

No, Khunnas is not available on MXPlayer. It is a Ullu web series and you can watch it there with a paid subscription.

No, Khunnas is not available on Netflix. It is a Ullu web series and you can watch it there with a paid subscription.

No, Khunnas is not available on Amazon Prime Video. It is a Ullu web series and you can watch it there with a paid subscription.

Where is Khunnas series available?

The series Khunnas began streaming on Jun 29, 2021, with currently Season 1 out right now and premiered online on Ullu.

Khunnas was directed by Saheem Khan.

Is Khunnas based on a book?

No, Khunnas is not based on a book.