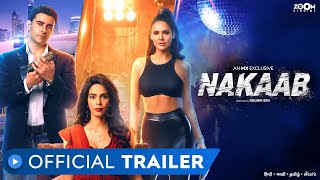 It is directed by Soumik Sen and is a Drama, Murder, Thriller show. This show is on Season 1 now and is Free to watch.

When Aditi Amre becomes involved in the high-profile death case of actress Vibha Dutta, she discovers the horrible secrets that Vibha has been keeping hidden underneath her public persona. Is it a Murder or a Suicide? As Aditi goes on her adventure, she discovers a side of herself that she had no idea existed. As Aditi develops an unusual kinship with the deceased, she inevitably risks everything to obtain justice for – her profession, family, and, most importantly, herself. Will she be able to break free from the shadows of her past or will they catch up with her? What appeared to be a simple matter has turned into a controversy that should be shrouded in secrecy. How does a small-town cop cope with a world that doesn’t belong to her, or does it?

Where to watch Nakaab?

Nakaab is now streaming on MX Player. This show is on Season 1 now and is Free to watch.

Where can I watch Nakaab web series?

All Episodes of Nakaab are streaming right now on MX Player.

Yes, Nakaab is free to watch

Will there be a Season 2 of Nakaab?

There is currently no information on whether the popular Thriller web series Nakaab is set to return on MX Player or with any other platform with its new season. We will update when the streaming platform announces.

On which OTT platform is Nakaab?

The new season of Nakaab was released on MX Player on Sep 15, 2021. You can watch it on the official app and website of MX Player by subscribing to the premium plan of MX Player.

Is Nakaab on MX Player free?

Yes, Nakaab is free to watch on MX Player

Is Nakaab based on a true story?

No, Nakaab is a fictional web series and not based on a true story .

Can you watch Nakaab with family?

Yes, Nakaab is made keeping the sensitivities of kids & parents in mind and you can enjoy it with your entire family.

How many seasons of Nakaab are there?

Is Nakaab available on MX Player?

Yes, you can watch Nakaab for free right now on MX Player.

No, Nakaab is not available on Netflix. It is a MX Player web series and you can watch it there for free .

No, Nakaab is not available on Amazon Prime Video. It is a MX Player web series and you can watch it there for free .

Where is Nakaab series available?

The series Nakaab began streaming on Sep 15, 2021, with currently Season 1 out right now and premiered online on MX Player.

Nakaab was directed by Soumik Sen.

Is Nakaab based on a book?

No, Nakaab is not based on a book.