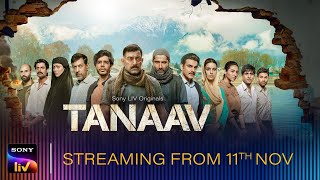 Tanaav is an Indian Hindi language web series produced by SonyLIV and is now streaming on SonyLiv OTT Platform.

It is directed by Sachin Mamta Krishn, Sudhir Mishra and is a Action, Drama, India-Pakistan, Spy, Thriller show. This show is on Season 1 now and is Paid to watch.

Kabir, a veteran of the Special Task Force, has since retired and sets out to hunt down an enemy, Umar Riaz, who he believes has eliminated him, but is still alive. After learning of Omar’s presence, he and an assembled special forces team decide to infiltrate Umar’s brother’s wedding. But when things don’t go as planned, Kabir and his team must do everything they can to make sure the dangerous man is caught.

Where to watch Tanaav?

Tanaav is now streaming on SonyLiv. This show is on Season 1 now and is Paid to watch.

Watch it now on sonyliv

Where can I watch Tanaav web series?

All Episodes of Tanaav are streaming right now on SonyLiv.

No, Tanaav is not free and requires a paid subscription to watch

Will there be a Season 2 of Tanaav?

There is currently no information on whether the popular Thriller web series Tanaav is set to return on SonyLiv or with any other platform with its new season. We will update when the streaming platform announces.

On which OTT platform is Tanaav?

The new season of Tanaav was released on SonyLiv on Aug 4, 2022. You can watch it on the official app and website of SonyLiv by subscribing to the premium plan of SonyLiv.

Is Tanaav on SonyLiv free?

No, Tanaav is not free and requires a paid subscription to watch on SonyLiv

Is Tanaav based on a true story?

No, Tanaav is a fictional web series and not based on a true story .

Can you watch Tanaav with family?

Yes, Tanaav is made keeping the sensitivities of kids & parents in mind and you can enjoy it with your entire family.

How many seasons of Tanaav are there?

Is Tanaav available on MX Player?

No, Tanaav is not available on MXPlayer. It is a SonyLiv web series and you can watch it there with a paid subscription.

No, Tanaav is not available on Netflix. It is a SonyLiv web series and you can watch it there with a paid subscription.

No, Tanaav is not available on Amazon Prime Video. It is a SonyLiv web series and you can watch it there with a paid subscription.

Where is Tanaav series available?

The series Tanaav began streaming on Aug 4, 2022, with currently Season 1 out right now and premiered online on SonyLiv.

Tanaav was directed by Sudhir Mishra.

Is Tanaav based on a book?

No, Tanaav is not based on a book.