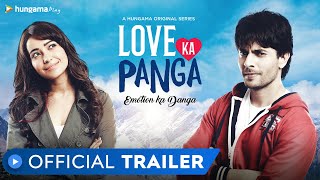 Neha, a sophisticated, well-educated Delhi girl plans to enjoy a quiet holiday in the beautiful mountains of Manali. Sumit, on the other hand, a loud chhora from Haryana, intends to live it up and make the most of his time. When a series of unplanned encounters bring them together, their respective plans go for a toss. He thinks he is being helpful but she considers him to be cheap. He thinks she has too much attitude and she thinks all he needs is a chamaat. However, somewhere between all the misunderstandings, they form a friendship that could blossom into something else. But does it lead to their happy ending? Can they overcome their differences? Or do destiny and fate have other plans for them?

Where to watch Love Ka Panga?

Love Ka Panga is a Hindi web series produced by Hungama Official, MX Player and is now streaming on MX Player. This show is on Season 1 now and is Free to watch.